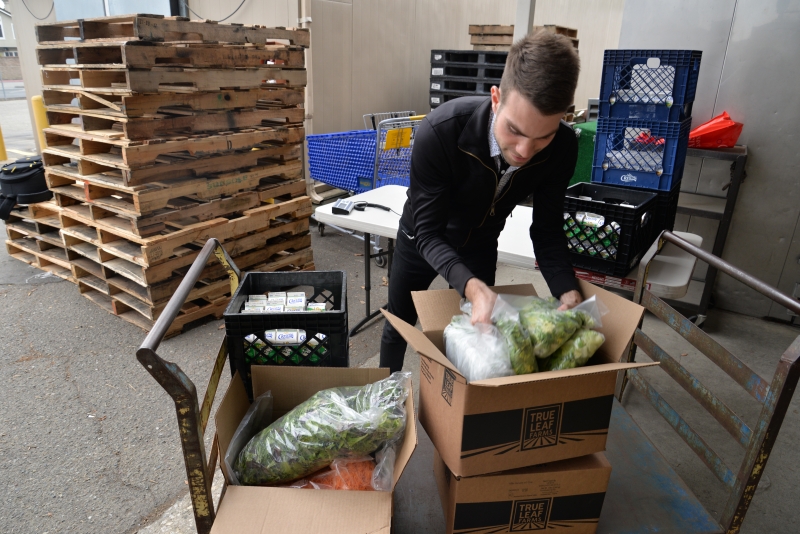 While the holidays are often a time of abundance, particularly when it comes to food, they are also a time when many face an increase in food insecurity, particularly children who rely on school cafeterias for their next meal. At the same time, data from Alameda County schools show that right before extended holiday breaks, schools often generate a surplus of food that typically ends up in the landfill because perishable and some packaged foods aren’t able to be stored for longer than one weekend.

To help bridge this gap, in December, Nutrition Services staff and volunteers embarked on a coordinated holiday food rescue mission across all 17 schools in the Livermore Valley Joint Unified School District (LVJUSD). Trucks picked up surplus food from each school and delivered it to the main district warehouse, where volunteers and StopWaste staff sorted and weighed edible food that was then donated to two local food pantries, Open Heart Kitchen and Sunset Benevolence. Nearly 900 pounds of surplus food was rescued and redistributed to the food pantries for families in need.

The event came on the heels of two similar food rescue missions conducted ahead of the Thanksgiving holiday break with LVJUSD and Oakland Unified School District (OUSD), which together resulted in the rescue and redistribution of nearly six tons of surplus food.  The efforts are part of StopWaste’s Food Share and Donation Program and the K-12 Smart Cafeteria Initiative, supported in part by a Food Waste Prevention and Rescue grant from CalRecycle.

StopWaste plans to take the success and lessons learned from these pilot missions and refine them with both school districts in the spring, with a long-term goal of scaling the practice across other districts. Additionally, with the data collected from these past rescue missions, both school districts will be able to identify opportunities to prevent future waste and better plan their food orders prior to the next school break to prevent surplus from being generated in the first place.

Read more about the program here.