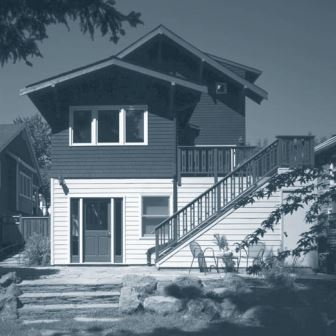 When Judi Ettlinger and Carl Gardeman began remodeling their Oakland home in 1999, they made energy efficiency a top priority. The project initially involved expanding an unfinished area at the back of the house to include a family room, laundry, guest bedroom, half kitchen, one and a half baths, and areas for exercise and study. The couple completed that work in 2002, and recently embarked on an extensive remodel of their cramped and inefficient kitchen.
At this point, Ettlinger and Gardeman know a lot more about green building, and are focusing not just on energy efficiency but on green material selection. “Having been involved with green building for several years now,” Ettlinger says, “we found that with the kitchen remodel it has become relatively easy to find alternative materials with mainstream suppliers. That was not the case five years ago when we were constructing our addition.”
Click on the Download button to read the complete case study from StopWaste's 2005 Green Home Tour.